How to Play Pai Gow Poker

Pai Gow Poker, or “Asian Poker,” like other new casino table games, uses poker hands for its basic structure. The player should know poker hand rankings before attempting to play the game. This is an exciting game that is played with an ordinary deck of 52 cards plus one joker. The joker is the major exception to the traditional forms of poker in that the joker is used as an Ace or to complete any straight or any flush.

OBJECT OF THE GAME

The object of the game is to win your bet by having both your High Hand and your Second Highest Hand rank higher than the respective hands of the Dealer. Knowledge of traditional poker is helpful because poker ranking procedures are used in determining which hand is higher. 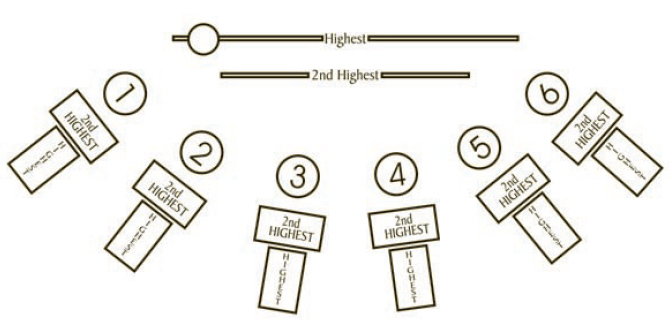 PLAY OF THE GAME

Once the cards have been shuffled, and the Dealer has announced “no more bets” the Dealer will shake the dice cup, which is used to determine who will receive the first hand, or the random number generator will determine who will receive the first hand. The dice are totaled, and the dealer counts counter-clockwise from the “chung” (or marker), which indicates where the deal begins. The Dealer is always counted as position #1, 8 or 15.

Each player is dealt seven cards which he will then arrange into two hands. One hand will contain five (5) cards and is known as the High Hand and the other hand will contain two (2) cards and is the Second Highest Hand. Once the two hands are formed, they are placed face down in the positions indicated on the layout and at this time, the player may not touch the cards again. The player’s seven cards must remain over the table and in full view of the dealer at all times.

The only requirement in forming the two hands is that the Highest Hand must contain only five cards and must be equal to or higher in rank than the hand containing two cards.

After all players have arranged their hands, the dealer will turn over and set the House’s hand.

Players are not permitted to expose or discuss their hands with other players.

An incorrectly set hand is “foul” and loses. Foul hands are: A) two-card hand that is higher than the five-card hand, and B) the wrong number of cards in each hand.

COMMISSION: The House will handle all bets and will charge a 5% commission on all winning wagers. A winning wager pays even money. No partnership may exceed the table maximum.

There is no commission for “pushed” or losing wagers.

If you require assistance, the dealer or floor person will be happy to assist in setting the highest possible potential ranking hand according to Seneca Niagara’s House Ways. Although we can help you set your hands, we cannot be responsible for any losses that may be incurred.

The order of hands from highest to the lowest is as follows: